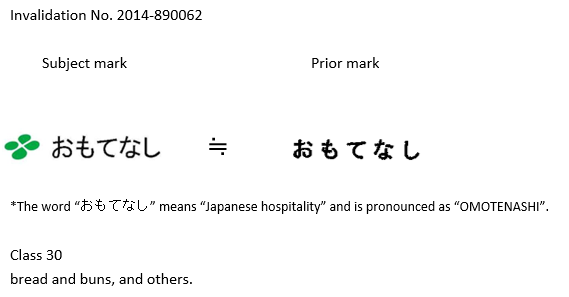 The trademarks were judged to be similar to each other in an Invalidation Trial. These marks share the word which seems to have weak distinctiveness and differ only in the presence or absence of the design. Although the owner of the subject mark asserted the weak distinctiveness of the word part, this assertion was not accepted. This is because there seems to be no fact that the word “OMOTENASHI” written in Japanese is generally used as an indicator of features of the subject goods even though the word is used in service industries. The assertion that the design itself should be famous was not admitted, since the device has not been used without the word “ITOEN”

If a prior mark which appears to have weak distinctiveness was registered long time ago, it is effective way to make sure the lack or weakness of distinctiveness by applying a mark comprising the weak word and a distinctive device. Unfortunately, the subject registration was invalidated even after making sure that. Based on this case, it can be said that we should be careful of reviewing the distinctiveness of a mark even after the Examiner judges the mark to be distinctive.

Incidentally, around the same time as the subject case, Appeal Examiners held that “OMOTENASHI” or its transliterations have no distinctiveness because they would be used as a promotional message (Appeal Nos. 2014-21668, 2014-21667 and 2015-1139). At this time, a Japanese news caster gave a presentation in which the word was used with a unique rhythm like “O・MO・TE・NA・SHI” delivering the goodness of Japan in order to hold the Olympic games in Tokyo. This caused a variety of business to use the word as a promotional message and decreased its distinctiveness.

There does not seem to be big difference between these precedents and this case in the circumstances of the use as a promotional message, and thus I find this case strict.

Login to quote this blog

You cannot quote because this article is private.